Back in the 1980s TV Drama rates were heavily dependent on the rates paid by the broadcast companies. These seem low by modern standards but were always boosted by overtime and subsistence payments to such an extent that they easily equaled the fees paid by independent productions. The advent of the commissioning model created by Channel 4 showed the establishment how to casualise the industry. The 1990 Broadcasting Act made the commissioning model the norm. From this point onwards independent productions set the rates. This is where the graph starts. I have used the rate for a focus puller as this is the grade for which we have the most reliable data. For the next twenty years the independent productions used their unprecedented power to hold those rates static. There was the odd wobble. Around 1995 the broadcasters bowed to the inevitable and made all of their technical staff redundant. Those crews did not know the going rates and undercut the established freelance technicians. They soon realized the unlivability of such rates and found the market level. In 1998, the introduction of the Working Time Regulations Act put a break on extraordinarily long hours and thus put better limits on the standard working day. This shortened hours but did nothing for the headline rate. In the early 2000’s productions found that crews were becoming increasingly unhappy with the static rates, and started to buy off crews with ‘box money’. However, in 2005 there was a coordinated action to stop this practice by producers and the static rate resumed.

The log-jam was finally broken in 2011 when BECTU came to a deal with the BBC which accepted the existing rate and then added the staff pay uplift for that year. This had an immediate effect on the entire independent sphere of the TV Drama industry, causing a much needed pay rise. For the first time in twenty years pay started to resume its normal link with inflation. Around 2008, the Grips initiated their campaign for £300/day as a minimum. All other grades that had assumed parity with the grips followed suit. A well known producer exclaimed that she felt that she had been ‘mugged’ by this move. Our response was that they had been slowly mugging us for the last twenty years. The extension of the tax break to television dramas with budgets in excess of £1m/screen hour has revolutionized the drama sector and brought huge inward investment. Since its introduction it has also effectively doubled the budgets of the bulk of independent drama productions. Crews have tried to use this new found wealth to increase their rates. To think they might double their rates is cloud cuckoo land but a rise of between 10% and 20% has come about.

While this might seem like good news, it is sobering to look back to 1990 to see how far we have come: or rather not come. Today’s rates are still 35% below what they would be if they had kept pace with inflation. This means that crews are in real terms cheaper than they have ever been. It is time that crews shared in the bonanza that is sweeping the country, and this will be the aim of all those fighting for crews in the future.

Tim Potter,
Chair, CDB
An amended extract from my article in British Cinematographer, issue 95
Click here to contribute to the rate survey. 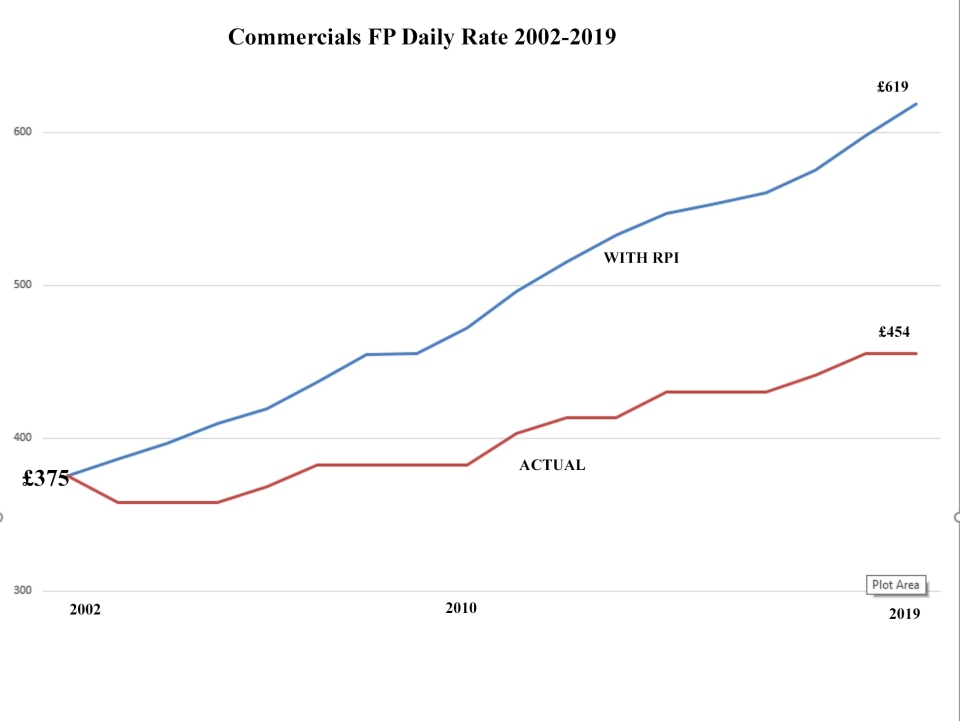